The Devil came and promised a view: Offering more than Coffee to Ocean View

The Praise Café is an out-of-place coffee shop in Ocean View. It was founded with an idea to reform its surrounding community and encourage neighbourly support. It’s a business like any other and needs to make money, but that’s not why it’s there. Its ambition is in its want to serve people. A simple notion, maybe, but not one easily recognised. By BRAD HARRIS.
I’m inside the café on a hot day and served a cappuccino, city-standard. Outside, the sun bakes dusty patios, beats upon the playing children… so bright.
Kenia Godard turns to me, uncapped enthusiasm for her new home flittering down.
“No one understands, though. No one can, because they aren’t here. I can tell you about the girl who was raped, or the couple who’s addicted to drugs, or about the murders and assaults… I can even tell you about the children throwing stones at our house. I can tell you about the people who are saved, the building of Praise Café and how people’s lives have been changed… But you can’t understand, because you don’t live here. I just mean that, well, unless you’re willing to come stay here with us and experience our kind of life – I just can’t explain it. You won’t understand unless you’re here with us.”
It’s her eyes that make it stand as something to remember. The blue irises expand as her pupils shrink to tiny pricks – blue – she has blue eyes. Her skin is white, her eyes are blue and her hair is dirty blonde. She’s different to them, and yet she’s loved by the community more than some of its oldest residents.
She looks at me, enthusiasm bubbling through once more. “My mom says I wasn’t meant to be born with this skin… I was Colombian at heart, and now I’m coloured.”

The Memory
It’s a cold morning in the coastal towns. Mist hangs unmoving on the beaches, creeping towards warm homes, blending with their snake-like chimney smoke. It’s quiet. So quiet.
There aren’t fishermen out today – not today, it can’t be risked. In a few hours the devil arrives, in all his machinery, all of his criminal policy. He won’t ask, he won’t even tell – that devil will move in and push out.
It’s 1968 and the forced removals are still underway. Two years ago District Six was the media’s focus, but now, far from the city centre, these lonely coastal towns are also under attack. Coloured people are a major demographic in Fish Hoek, Simonstown and Noordhoek. They settled in these areas long ago and grew a fishing culture that formed the backbone of their small economies. They’ve got houses, not slums – and many have gardens and pets. It’s a whole community that’s threatened.
The residents of Noordhoek thought it might get this bad – sure, they thought it, but not one of them ever expected to see those bulking yellow arms enter their neighbourhood. It’s a nightmare. Something not meant to come true. But today is the day that it will.

Coloured families stand outside their homes, enjoying their sea-view gardens one last time. There’s no defiance in the children’s game on the swing, no understanding, but the adults are standing in the corners, huddled around fresh eviction notices.
Talk is that their time is near. The kids shouldn’t be here to see it. The house should be checked a last time, maybe something was forgotten. Something might be left behind.
The big question is where are they going? When are the buses arriving? Simonstown and Fish Hoek only move tomorrow, reminds someone uncertainly. Maybe the buses won’t arrive. Or can they fight? Should they run?
No one has to wait any longer, as the official lights round a corner.
He’s here. The devil is here in his five flashing-blue Toyota Corollas, and in his scuffed black shoes he steps out.
Move. It’s not the face that says it – it’s the navy blue uniform that commands them.
There’s no time. Quick. Quick, move. Bags packed, forgotten things grabbed and made waiting on their former roadsides. The buses will arrive soon, someone says, pointing across the way. But where were the bulking yellow arms? There is no force beside the words this time, yet the words brought a far worse realisation. They aren’t simply losing their homes, they’re leaving them. Are they giving up? They were forced, they later cry, but the children won’t understand so easily. They’ll become bitter, enraged… they won’t understand.
Lines of buses turn the corner, beige and white buses with dirty windows. One of the navy blue uniforms jokes about checking for their tickets, but they begin to climb on anyway. The children’s game stops in a hurry, and a refusing older resident is carried away with batons and blood. But still, they climb on.
Then the devil’s mouth pierces the still morning with an answer. Ocean View, the megaphone crackles. They’re going to Ocean View. At least they’ll get a view – at least the ocean will remain home.

The Purpose
Getting ready to leave for a follow-up interview with Kenia, my phone vibrates and I unlock it:
Hi brad! So our café’s electricity cables got stolen last night. Surprise surprise haha. We are closed today unfortunately. So sorry! Kenia
I sit down heavily, trying to deny the relief of not having to drive out and over Ou Kaapse Weg. But two hours later I get another message:
Back in business!! Plans can continue as usual!
On the road. An hour later I’m pulling up outside Praise Café.
I hardly notice the scenery and background noise this time. It isn’t strange to walk into the café over dusty grounds and non-city-like sounds – it’s normal. Pleasant.
Kenia and Stephen welcome me, Bernie calls from the back, and we start with easy conversation about the stolen electricity cables. The full story no one seemed to know, but they had been stolen and then replaced, or fixed, or found again.
Already there’s another man in the café. A little boy runs around too, but returns to the man now and then for a secure nod to continue his game. I sit down near to the door, and he sits opposite me. Kenia and Stephen are at the table beside us.
We nod at each other and smile. I’m nervous.
The man’s face is worn. Not old, but wrinkled from work or experience, and his eyes are turning dull. He’s wearing jeans, a t-shirt and has new bandages wrapped around his neck. Moving down, his hands and arms are covered in tattoos (I wonder if they also run up his neck). His right hand I first noticed before we were introduced, and leant back to take a moment.

The Reflection
It’s two weeks later when I follow up.
“Marco? He’s doing well,” says Kenia, grinning over her coffee. “Stephen helped him get employed as a mechanic. So yeah, I mean, Marco’s only in training for now, but if he doesn’t do anything terrible then he’ll get to keep the job. He wants to keep the job. And he’s still with Jamie’s mom – so far they seem to be good for each other. He comes into the café every now and then. People are starting to understand why it’s there, I think. It’ll take a while, but already it’s starting to help.”
Then, two weeks after I hear about Marco’s apprenticeship, Kenia passes along some unfortunate news. Marco’s now gone back to dealing drugs and, so far as anyone knows, has broken off contact with Jamie and his mom. You can’t simply leave the Hard Livings, even after they try to kill you. Gang relationships are still something largely misunderstood, something which even Jonny Steinberg has recognised.
But, the café continues running and people are still being affected by it. While gang shoot-outs have started up again over the past few weeks, and with three victims dead, the Praise Café’s intercession is needed more than ever. It’s still difficult for the community to understand the real purpose behind the fun sun-yellow font on their front doors, but more and more stories are pouring in.
Kenia tells of two policemen sympathetic to what the café is doing, and it provides some hope for the Ocean View department following my unfortunate correspondence. Then, a Muslim woman has offered to donate baked goods and hot food for the café to sell – the café which is centred around Christianity, which could have made it exclusive, but people are beginning to understand the heart of it. It’s not about religious denomination, and judgement is left outside its paint-peeling doors. Inside is only a pursuit of truth and change.
*
I, wearing my scuffed black shoes, entered the community with an intent for collecting stories of broken lives radically changed, but what was revealed is far more realistic. Worrying to some, the Praise Café’s vision is built around Christianity, but it means that the team working here is concerned with serving their community without reward. Their reward is what change they hope to make. It’s not about evangelism as much as it is about community. The idea is one of development. It’s not a quick fix – it is a slow change of hearts and attitudes, and already it’s taking hold.
They didn’t get an ocean view, they’re overrun by drugs and gangsterism, but they’re still there. They didn’t get an ocean view, but they kept their community together. They kept their spirit, and that is what allows the Praise Café such effect. Spirit. DM
Photo: A polluted stream runs through the urban area of Ocean View in Cape Town, South Africa, 08 March 2011. EPA/NIC BOTHMA
The Devil came and promised a view: Offering more than coffee to Ocean View
By Brad Harris• 6 January 2015 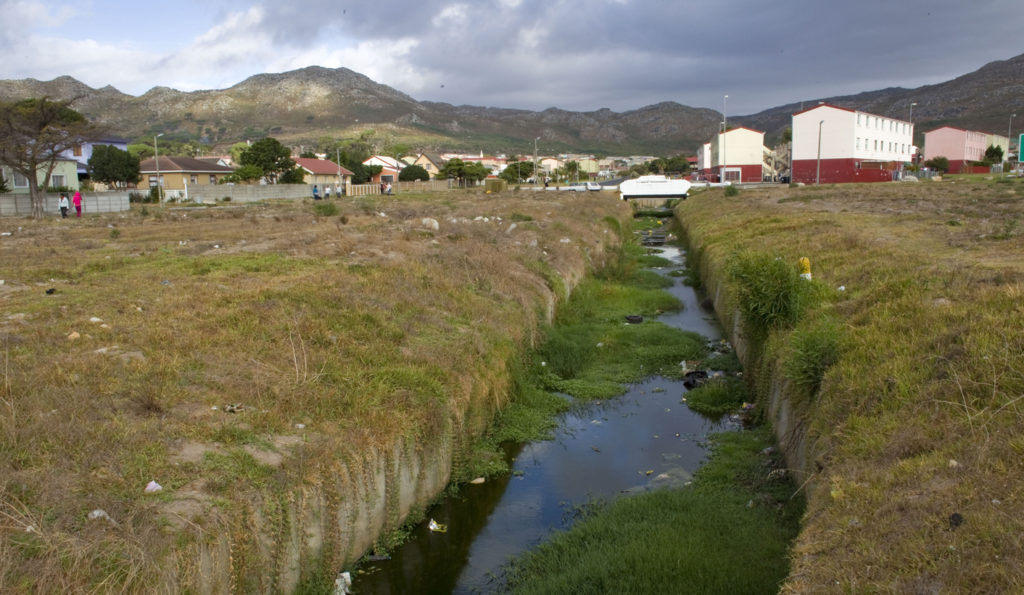 epa02637999 (38/39) A polluted stream runs through the urban area of Ocean View in Cape Town, South Africa, 08 March 2011. Lack of infrastructure in the rapidly expanding lower income urban areas across South Africa has caused severe water management issues for local governments. The flow of urban streams and storm water drains is blocked in many areas with high levels of pollution due to the lack of waste removal services. World Water Day is marked annually on 22 March. The official United Nations statement reads: This year, UN-Water chose the theme Water and Urbanization under the slogan Water for Cities: Responding to the Urban Challenge. The objective of WWD 2011 is to focus international attention on the impact of rapid urban population growth, industrialization and uncertainties caused by climate change, conflicts and natural disasters on urban water systems. EPA/NIC BOTHMA ***PLEASE REFER TO THE ADVISORY NOTICE (epa02637961) FOR COMPLETE FEATURE TEXT***

The Devil came and promised a view: Offering more than coffee to Ocean View