Stories from Our Past

This is the place where stories will be told of the Valley in which we live. As with any story it starts with "Once upon a time..." and come from snippets/sources in the Fish Hoek Valley Museum and the putting together of information by Dr John Clifford in the Fish Hoek Fossikings.

The natural history of the Fish Hoek Valley is obviously as old as the planet itself.  At various times in its long history, it has been under the sea, elevated higher than its present elevation, or subjected to different climates with their appropriate associated vegetations.  A review of this natural history was made by artist John English (a Trustee of our Museum Trust) and occupies a proud place amongst the museum’s permanent displays.  The first article included in this chapter was published some fifty years ago in the Fish Hoek Echo.   It provides a comprehensive overview of the geology of the valley throughout the ages.  It also explains why Fish Hoek beach is one of the safest beaches especially for children which made Fish Hoek so popular as a holiday destination.

From time to time strange sea creatures are washed ashore at both ends of the Fish Hoek Valley.  Amongst these have been tropical sea snakes.  This chapter includes a newspaper article that identifies the species and the normal habitat of the sea snakes that sometimes are found on our shores.

The natural history of the Fish Hoek Valley provided rich deposits of Kaolin, also known as ‘China Clay’, a valuable mineral in many industrial processes such as pottery and ceramics (particularly porcelain), paper manufacturing, paint, and even glue[1].  The Fish Hoek Valley kaolin is surprisingly about three times as rich as the English and Malaysian kaolin!

The natural history of the Fish Hoek Valley must include the fish in its adjacent oceans.  Trek fishing, a method involving the pulling-out of a long net from one point along the coast behind a rowed fishing boat around an arc, returning to the shore some distant further along the beach, after which the net is pulled into the shore from both ends.  Fish trapped by the net are thus drawn to the shore where the Trek Fishermen select the fish for their use, the rest being thrown back into the sea.  This chapter includes some articles found in the Fish Hoek Valley Museum archives on this important industry, now however with the serious reduction of fish especially in False Bay, more continued as a tourist attraction rather than a commercial viability.

Linder said that the prohibition on alcohol was dubbed the first drinking and driving law: “After drinking, wagoners, due to their hangovers would damage their wagons and cause accidents on the trek - we didn’t have roads then."

Since then, the town had maintained its non-liquor selling law.

“Only restaurants have liquor licences here. If a person wants to go to a pub or buy alcohol, they have to go to Kalk Bay, Noordhoek or any of the neighbouring areas,” said Linder.

He added that Fish Hoek, apart from the architectural change, was still a very conservative area.

It has one of the oldest corrugated buildings, known as the Victorian Times, and the De Villiers barn has been revamped. The catwalk, where people still walk and look out to sea, also remains a feature. 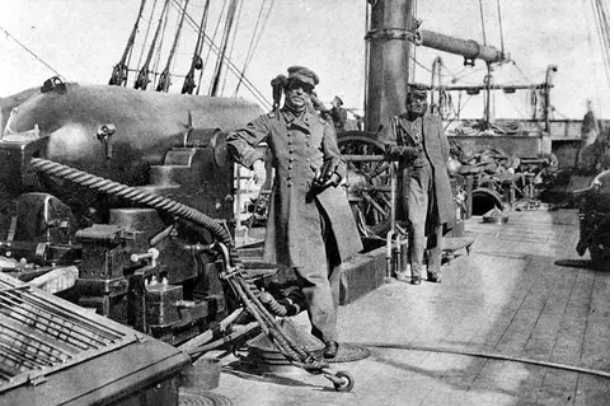 IN COMMAND: Captain Raphael Semmes, Alabama’s commanding officer, standing aft of the mainsail by his ship’s 8-inch smooth bore gun during her visit to Cape Town in August 1863.

Cape Town - A former schoolteacher who wished that her farm would become a township after her death played a part in helping to found the town that is now known as Fish Hoek.

Hester de Villiers was aged 51 when she bought Fish Hoek farm, where she cultivated fields of wheat and vegetables. She bought water rights, which allowed water from the Kleintuin spring to irrigate the fields and supply the farmhouse. She died in 1914 and in 1918, two years after the death of her husband, Izaak, the farm land was sold in portions and the proceeds were divided equally between her stepchildren.

This year, Fish Hoek holds its centenary celebration as a result of the land being sold at 11am on April 24, 1918. 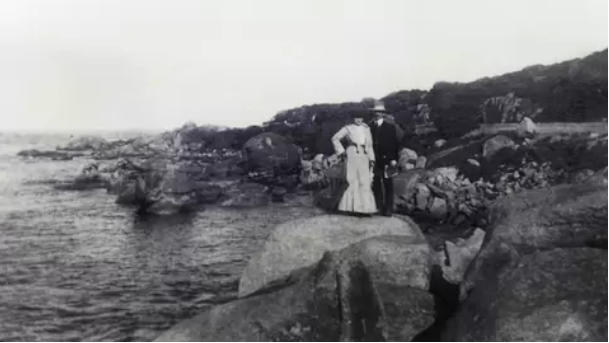 ON THE ROCKS: People walk along the unfenced railway line to access their favourite spots in 1910.

“The land was sold in two auctions. The biggest one was on April 24, where a large number of plots were sold. But in this day and age, this date resembles a huge moment for Fish Hoek,” said Fish Hoek Valley Historical Association chairman Alan Linder.

Before it was a residential community, Fish Hoek was commonly known for whaling, fishing and farming. One of the most idiosyncratic facts about Fish Hoek is the grant of land policy that prohibits anyone from opening a liquor store or pub. It also has no nightclub.

Fish Hoek Valley Museum curator Sally Britten said the original deed of 1818, signed by Lord Charles Somerset - then governor of the Cape - had conditions: “The first policy was that there be no wine house because wagoners who brought produce to the Cape would drink and forget about the job they had to do. The second policy was that trek fishermen should always have access to fish on the beach." 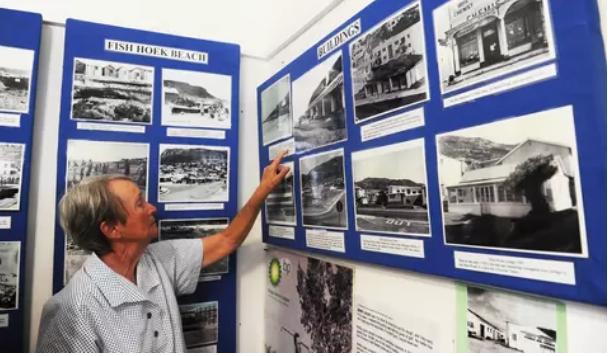 HISTORIC MOMENT: Sally Britten is the curator of Fish Hoek Museum, a town celebrating its 100th birthday in April.

Some of the famous people who came from the community include the original manufacturer of Mrs HS Ball’s Chutney. As part of the centenary celebration on March 23, Fish Hoek will be celebrating Mrs Amelia Ball’s birthday.

Linders said that the town, once a holiday destination, is now more of a retirement village, with "more people over the age of 55 than those (who are) younger, but it’s slowly changing in the aspect of integration. There are a lot of clubs and associations and we have great water sports.

“The only thing we are missing is a central business hub,” he said.

Britten said crime is very low in the area.

“We have a very good neighbourhood watch, but we do have those isolated break-in incidents. But living in Fish Hoek is calming - the calm sea and gentle waves are relaxing,” she said.